The winging ceremony itself was short and sweet. This was a huge relief to me since I was assigned the task of not only pinning on Ryan's wings, but keeping Ian & Nathan as quiet and happy as possible. A bag full of brand new Cars $1 items from Target and at least a pound of Cheerios helped me achieve my goal. Fortunately the Navy's air community is all about the booze and a keg of beer flowed freely at the back of the room so the crowd that had gathered also grew nosier as the "ceremony" continued. 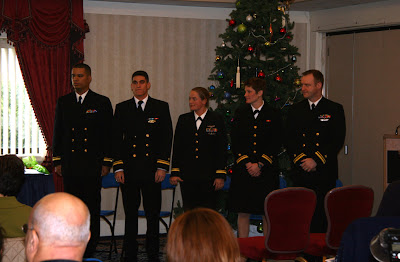 The last five standing. This is the very beginning of the ceremony. You can tell by their rigidity that the beer has not yet made it to the front of the room. 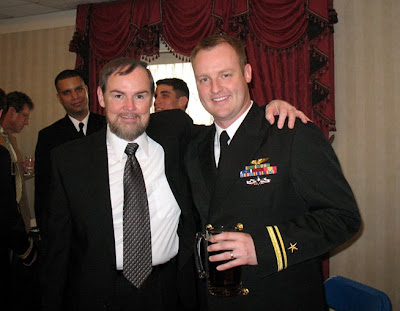 Ryan and his dad (and a super thrilled Dario in the background). Don't you just love the big ol' mug of beer in Ryan's hand? That was delievered to each new NFO by their new squadron. Ryan's has the word "Teck" etched on the front. We're pretty sure they were going for Peck, but as we learned at our wedding, Peck can be more difficult to spit out correctly than one might imagine. 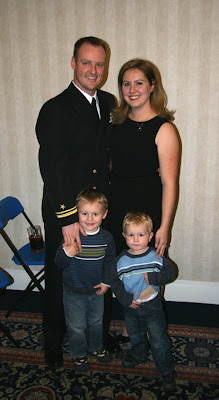 Don't we all look so pretty? I think that Nathan is trying to show off his tummy.
Posted by Melissa at 8:46 AM

Congratulations, Ryan! You all look fabulous! Cracking me up with the pound of cheerios and Cars toys.