Somehow I have finally managed to convince Nathan that it is time for him to be a big boy and use the potty. He's had decent control over his "movements" for quite some time. In fact, he hasn't pooped in public since he was just over a year old. This has been wonderful! Once Ian was potty trained last year, I stopped carrying a diaper bag. Being in control of this was not enough for stubborn Nathan though. I'm not sure what I finally did "right" in order to convince him to use the potty yesterday. 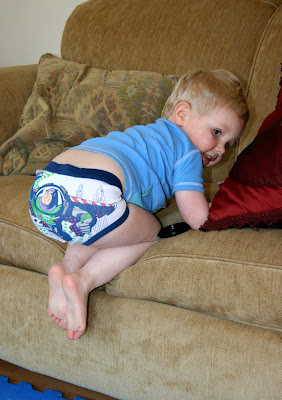 Here's Nathan showing off his new underwear. I made a HUGE deal out of this special package of Buzz Lightyear underwear just for Nathan. He was so excited. I asked him to turn around and so I could take a picture and he climbed up on the couch...to give me a better view??? I don't know. He can be so silly. 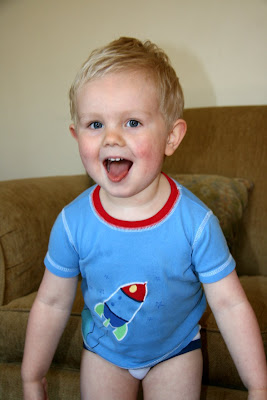 He had to get in a little happy dance after posing. 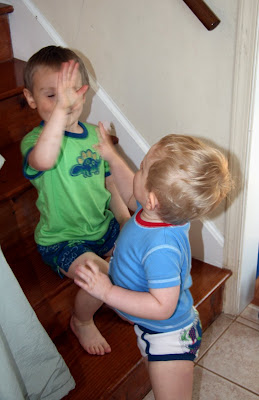 I tried to encourage Ian to act as excited as possible. He didn't get why this was such a big deal. After all, Ian's been doing this for a whole year. ;) Ian gave Nathan a high-five after Nathan's first potty success yesterday. 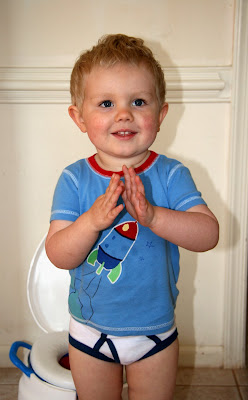 Yet another happy dance after potty success. Our family tradition, so to speak, has been an ice cream reward for the first poop on the potty. The boys were thrilled to have a McDonald's sundae after dinner last night. 3-year-olds are still so easy to please.
Posted by Melissa at 11:51 AM

so so so cute! Love the high five picture!

Awesome! Go mom! Go Nathan! And I too love the high five!!! Mayzie gets really excited for Addie when ever she attempts to use the potty or even shows mild interest in it. That really is a great help, but Addie is stubborn.

Oh, Sheelagh, I hear you on the stubborn front. Both boys are incredibly stubborn and took their sweet time when it came to using the potty. I was convinced Nathan would wait until kindergarten before giving in and using the potty. :)

That first picture of him in the undies is too cute - I want to pinch his bum!

Marah really enjoyed nathan's pictures LOL
These are adorable! The only potty training shots I took were one of her on the potty and one of the pee that she dumped on the carpet afterward. Lovely :)