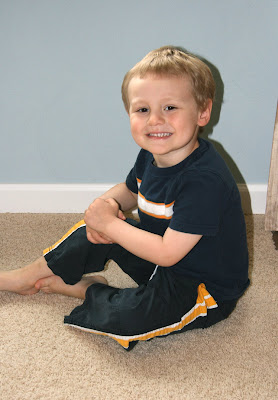 Ian is such a ham. He will almost always post for a photo. He came up with this pose all on his own! It is way too cheesy for me. He's such a cute 4-year-old! 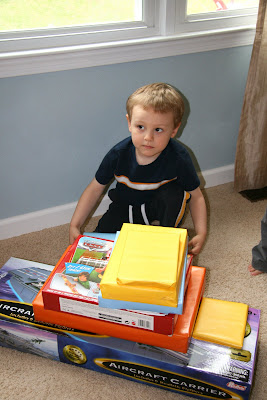 Here's Ian with his stack of birthday gift, minus the bike and some other smaller gifts from Grandma & Grandpa P. that I forgot to bring downstairs at first. He almost looks like he doesn't know what to do. Oh, don't mind that I didn't wrap two of the gifts or adorn any of the packages with bows or ribbon...Ian certainly didn't mind. 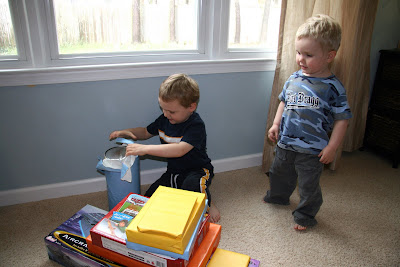 Nathan did his best to wait patiently. 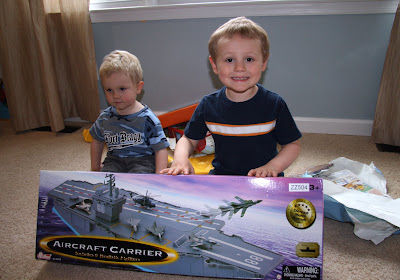 Ian was thrilled with the aircraft carrier from Grandpa & Grandma S.! (Technically this was supposed to be a Christmas gift, but I made the executive (MOM) decision to wait until Ian's birthday). It was so sweet, that night when I was tucking him in he asked if he would be able to keep all of his gifts because it wasn't going to be his birthday anymore when he woke up. He specifically asked if he had to give the carrier back to grandma & grandpa. So cute! 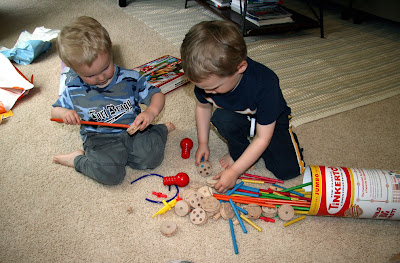 The tinker toys from Grandma & Grandpa P. (Another Christmas gift that I delayed giving them until now) were also a big hit! Both boys play with the Tinker toys many times a day and ask that I make them lots of complicated structures. I already know that I need to buy more of these.
Posted by Melissa at 3:40 PM