Let's see if I can knock out the rest of our Disney trip in a few posts today.  If so I can finally share what the heck we've been up to in May, June and July!

On our second day at Disney we went to Epcot.  We knew the boys would not be as excited with this park, but they still had a great time.  Ian now calls Epcot his favorite park because there weren't any scary rides.  He seems to have forgotten how uneasy he was when riding California Adventure.

We found a great store at Epcot where we asked the boys to select any ear hats they liked  Nathan immediately selected the R2-D2 hat and eventually Ian chose the same one. 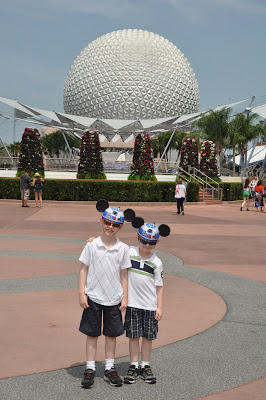 Ryan wanted to "drink around the world", but I was initially not in favor of this idea.  This was not because I don't enjoy beer, but because the choices in Mexico were lame.  Then we stumbled upon a delicious fruity drink cart in China and I was sold on the idea.  We were visiting Epcot during their Flower Festival or something like that (who can remember after all the beer what exactly the festival was called).  This year instead of just having a bunch of booths and topiaries, tons of kiosks were set up all over the park featuring little country treats and booze.  We were in trouble.  Notice the sampler of four beers we picked up in Germany BEFORE we managed to finish our drinks from China.  The boys were happy to pause repeatedly since they enjoyed snack after snack to include potato pancakes and panna cotta.﻿ 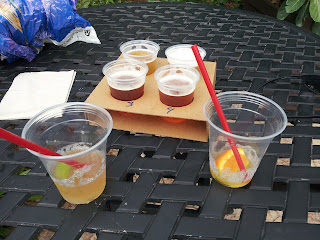 While we worked our way through another beer sampler in Italy (super delicious selections, by the way), the boys goofed off, ate and posed for pictures. 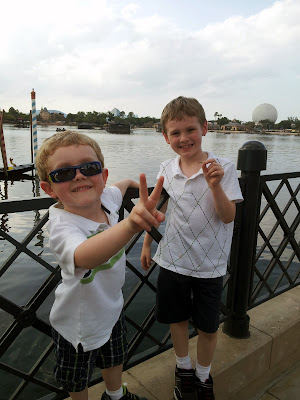 For you, Mom, the Lady and The Tramp topiaries.  How they capture the characters expressions so well with plants amazes me!﻿ 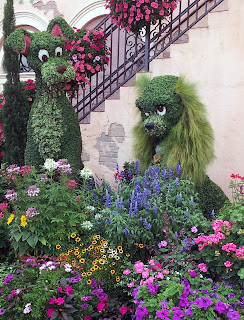 The boys were very happy to pose for a pictures with Captain Hook.  Notice Nathan's "hook".  Ian is pretending to be scared.  Silly boys.  I promise they were not drinking along with us.﻿ 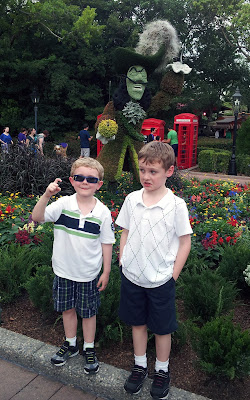 After wandering all over Epcot we ended our day with dinner at Coral Reef and a mad dash to ride the Little Mermaid ride next to the restaurant minutes before the park closed.  Dinner was delicious!!!  I highly recommend this restaurant.  It was where I had my SECOND steak of the day which is crazy since I generally eat red meat maybe once a month.  I would like to point out that my FIRST steak of the day was at Le Cellier.  That restaurant was a HUGE disappointment.  The cheese soup was out of this world, but I've already managed to get my hands on the recipe so none of you need go there...just ask me for the recipe.  ;)  Our steak was dry, overcooked and overall nothing special.  For $44 I believe it should have been better than something we could make at home.

I hope we can go back to Disney during April soon.  The festival carts were really great and a perfect way to use up a bunch of those snacks from our dining plan.  I honestly don't know how we would have "spent" all those snack points without all the unique carts!
Posted by Melissa at 4:58 PM

What Great pictures! The boys looked so happy and I'm sure you and Ryan were too after going to China and Germany....hic....