This past weekend we decided to finally force Nathan to grow up just a little bit. We took him away from his crib. I'm pretty convinced that he would have happily stayed in his crib through kindergarten. This crazy boy of ours never once attempted to climb in or out of his crib. Ever. Ian was climbing out before he was 18 months old!

We purchased a bunk bed set from Flexa about a year ago for the boys. Ian needed a twin bed and we just figured it made sense to buy a bunk bed set since ultimately they would end up sharing a room. We attempted to move them into a joint room at that time, but they were more interested in goofing off than sleeping. Ian quickly returned to his original room.

We think that they *might* be mature enough to begin sharing a room again. Nathan sleeps so peacefully and Ian likes to get up at the crack of dawn, so I remain unconvinced that this is a good idea. Nevertheless, we set Nathan's new bed up in what is expected to be the boys' shared bedroom. We haven't bothered to paint or replace the baseboard so just ignore the background in these pictures. 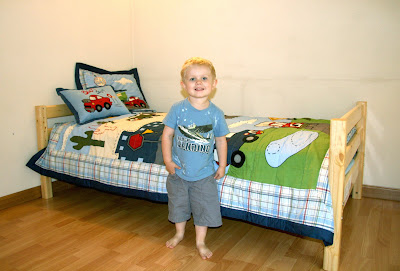 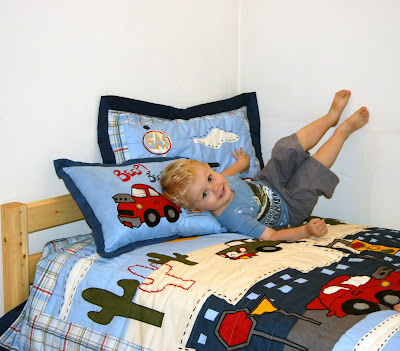 Nathan loves his new bed! I had to wake him up for breakfast the first two mornings in his new bed. I think he would have stayed there all day if I had let him (love him!). Today when he woke up he actually stayed in his bed and called for me. How adorable! I'm not going to break the news to him that he can get out of bed on his own and come find me.
Posted by Melissa at 2:09 PM

The new bed covering is adorable. He looks so happy! I'll cross my fingers that he'll still call for you when he wakes up. So darn cute!

That is sooo funny that he calls to you. Hopefully he won't figure that one out any time soon. :-)