Disney Part 1 (of too many)

In April we took the boys on a SURPRISE trip to Disney World!  Unfortunately our "reveal" video didn't turn out very well so we aren't going to post it here.  We made it all the way to the Orlando airport and on to the Magical Express bus before we had to tell the boys what we were doing.  Ian was thrilled when we told him we were going to Disney World while Nathan was underwhelmed.  The news didn't seem to sink in immediately.
Not only was this the boys' first trip to Disney, but this was their first time flying on an airplane!!!  To say that I am fearful of flying is an understatement.  I get sick to my stomach when I see an airplane in the sky.  Ridiculous, I know.  It's not like Ryan flies multiple times a week or anything.  I did my best to disguise my fear and help the boys enjoy their first flight.  They thought it was awesome!﻿ 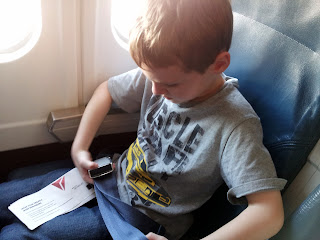 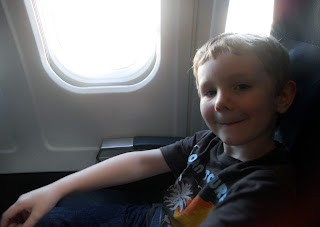 The pilot invited the boys into the cockpit once we landed in Atlanta.  I didn't think they let anyone take a tour anymore!  Ian made himself right at home and began messing with everything.  Thank goodness we were taking a different plane for our connecting flight.﻿ 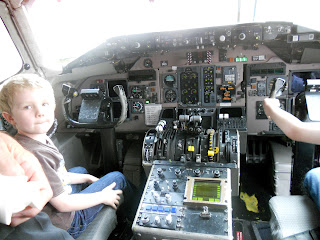 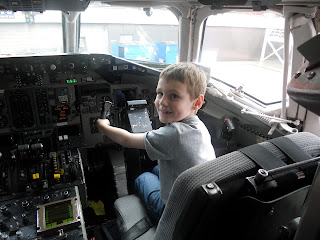 After behaving perfectly on the plane, the boys needed to let loose a little bit while waiting for our second flight to board.  I handed over my point and shoot and let them have some fun.﻿ 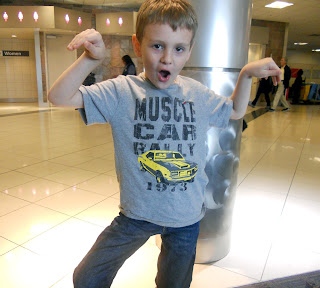 That's me and Ryan trying to rest in the background.  We are lucky our boys are (mostly) well-behaved.﻿ 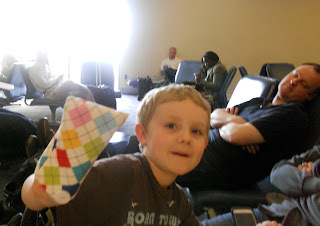 Beignets for dessert in our hotel room!!!  I think this is the #1 reason Ryan and I keep choosing to stay at the Port Orleans French Quarter Disney Resort.  Yum!!! 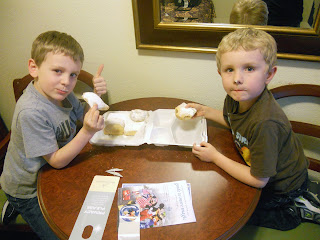 We had just enough time after dinner to take the boat over to Downtown Disney.  Needless to say the Lego store was the favorite of the night!  Somehow we only spent $15 which is crazy because we are all Lego fanatics. 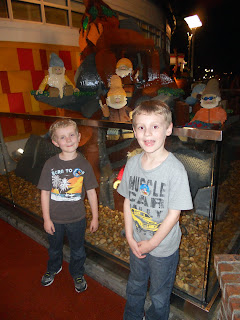 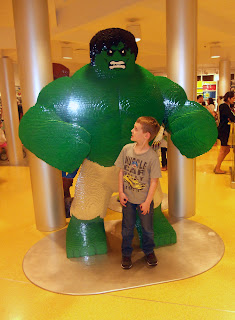 Take a guess at how long it took the boys to fall asleep this first night.  If you guessed three or four hours you'd be correct.  I don't remember how late it was when they finally passed out, but I do know that we had to separate them and it was the LATEST they had ever stayed up at night.  Worth it! 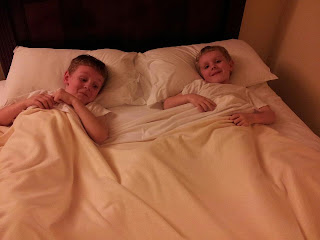 Our adventures at Magic Kingdom and more will be next.  I promise to post sooner rather than later.
Posted by Melissa at 4:00 PM

I am so proud of you for getting on that plane :) Looks like an awesome trip so far and its nice to know that cockpit tours are still being given :) I think they used to let kids in the cockpit during the flight and perhaps that's what is banned now. Can't wait for the next installments :)

What a fun, fun surprise for your beautiful boys! We've been tossing around the idea of a Disney trip. It's one of those things, like having kids or buying a house: it's never going to be a great time, right? But you just gotta do it? I don't know. Can't wait to see the rest of your posts.
PS Are you on instagram? :-)