Guess who is home again?  Yup, Ryan is back from deployment again!  It's only a couple weeks shy of last year's deployment homecoming.  Ah, such a weird life.

I was not convinced of the date of this homecoming until I received an email at 3am sent from Frankfurt, Germany.  That email meant that Ryan made it off the ship and on his flight out of Bahrain.  I still didn't get us ready until 40 minutes prior to leaving for the Norfolk airport...including deciding what we'd all wear.  Most last-minute homecoming ever!

The boys and I were lucky enough to be joined by my good friend, Denae, a fellow Screwtop wife.  She took off from work early to act as our "photographer" and help us welcome Ryan home.  She waited patiently with us on this miserably hot day (yes, it was even hot inside the airport terminal).﻿ 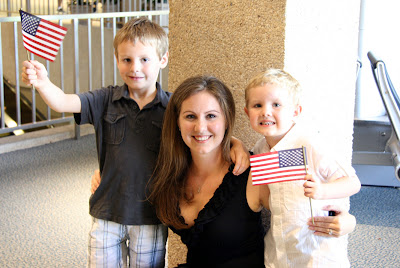 I held the boys back as long as possible so they wouldn't completely disturb the other passengers as they headed toward baggage claim.  Turns out about 1/3 of the plane was made up of guys returning from the ship and other military-related places.  Ian and Nathan were absolutely thrilled to see Ryan, as you can tell from this picture. 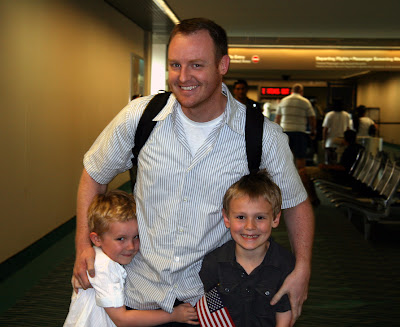 Another photo with Daddy.  I could NEVER get them to smile like this no matter what I did...unless maybe I regularly left the state/country for months on end.  Hmmm...that doesn't sound like such a bad idea. 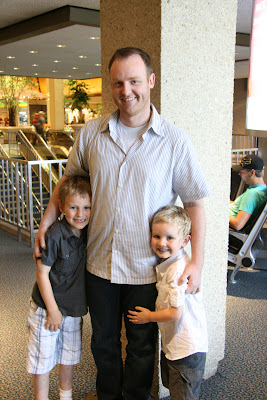 Welcome home! I hope you all have some fun plans for the rest of the summer!

Such cute photos!! Glad Ryan made it home :)

Yeah! for Daddy and Hubby being home. Seriously, I don't know how you do it. Also, you look amazing! Can I be jealous! Oh, and I'll leave the country with you.

So glad you are all together again! You are an amazing family! So so so cute...all of ya!