My Kids Are Weirdos

Today the boys almost came to blows...over a smoothie...containing spinach. I do believe I have the weirdest children alive. And my smoothie didn't even look nearly as pretty as the one below (nor did it contain whipped cream)! 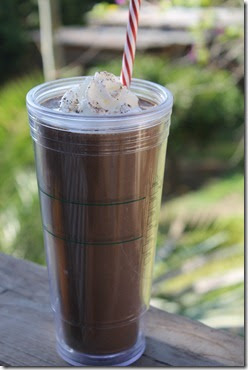 In my attempt to have the family eating even healthier this year, I've been trying out new recipes almost daily. Today was the mocha "green" smoothie. I didn't plan on sharing with the boys as it contains espresso powder, but I figured a sip to taste wouldn't hurt. This way I would know if I should even bother making them their own espresso-free smoothie, right? Little did I know the chaos it would cause and that they would LOVE the smoothie even AFTER I told them it contained raw spinach.

Here's the recipe so you can make your own yummy smoothie:

*I used chocolate rice milk, but overall the smoothie was too "chocolaty" for me so next time I'll use almond milk or less cocoa powder. I could have easily handled more than 1 handful of spinach as well and I will add 1 T of chia or flax seeds next time too.
Posted by Melissa at 7:51 PM

Those boys are really something! So cute. You're a good Mom, that's for sure.