Oddly, the easiest way to share pictures with Ryan when he is deployed is via this blog.  Forgive me as we jump back to March to share some pictures.  Easter photos are coming soon, I promise.

Ian lost another two teeth in March, bringing his total lost teeth to 4.  I had the pleasure of yanking the fourth tooth out because he left it hanging by a thread for days and it was driving me crazy.  There was blood and screaming, but 10 minutes later he posed for this ridiculous photo. 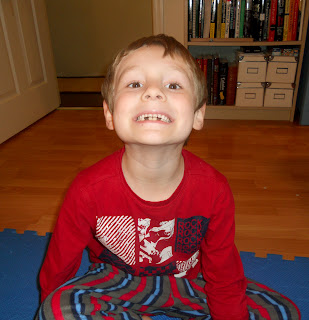 On March 13 we said good-bye to Ryan for the third time for this deployment.  This turned out to be the "real deal" as he flew to the ship later that evening.  Since we just completed our last deployment 9 months earlier and Ryan was in and out so much during those 9 months, it seemed normal to say good-bye yet again.  As usual, I was the only one who cried, but that only lasted for about 2 minutes.  This time I knew I could keep the kids alive and happy without Ryan for an extended period of time.  :) 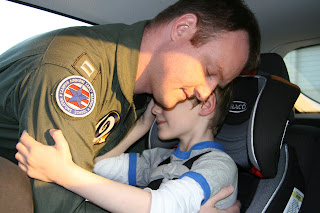 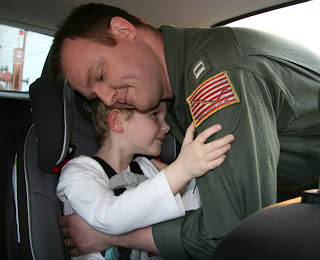 I almost forgot to take a St. Patrick's Day picture!  I apologize for the odd expressions and blurry photo.  The boys were on their way up the stairs to get ready for bed and I quickly snapped this crazy shot.  We enjoyed a fun rainbow-themed playdate with a rainbow fruit salad and some cute crafts, but I won't bore you with those photos...this time. 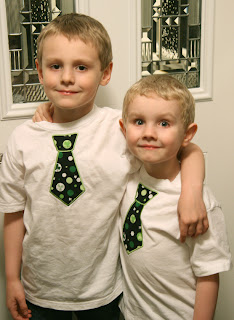 March ended with back-to-back school programs at Nathan's school.  This year was a patriotic theme in honor of the military.  Of course.  Instead of crying, I sat with friends and laughed at the kids the whole time.  That's what we're supposed to do during these programs, right?

The kindergarten class sang the National Anthem.  It really was quite adorable.  Nathan was front and center and sang his heart out. 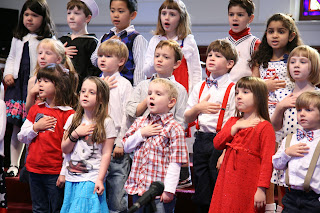 We have many active-duty families at our preschool/kindergarten.  Here are photos of the deployed fathers of kids from the kindergarten and 4-year-old preschool classes.  The music director read the names of each deployed parent and had the child wave to the crowd.  In the three years we've had children at this school, I think Ryan has been able to attend one program -- the school hosts 3 each year. 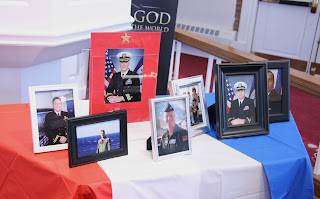 Back to April soon!