We finally took the boys to see a movie in the theater for the first time this past week. Ryan took a week off from work so we have been enjoying our 'staycation' and time together as a family. We've also had contractors working in the backyard (again), but that's never fun. 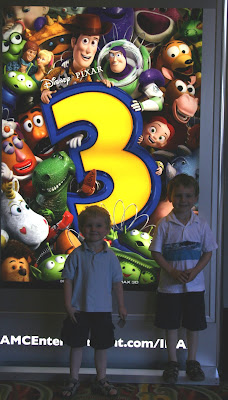 Let me apologize for this awful photograph! I switched to auto mode on the camera and THIS is what I ended up with AFTER brightening the photo in Photoshop. This is why I rarely use auto. Hopefully you can sort of see the boys and their excited faces. 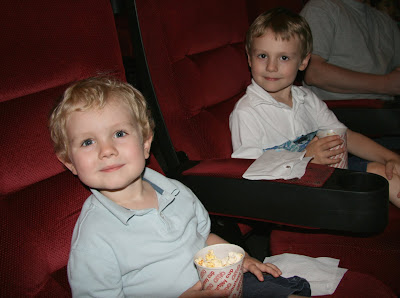 Popcorn was the key to keeping the boys happy as they sat through countless commercials followed by tons of movie previews AND a short. My goodness! It's as though the powers-that-be had no idea this was a children's movie. I had to explain at least 10 times to Nathan that Toy Story was going to come on soon after the many, many previews. I promise.

Toy Story 3 was definitely different than the first two movies, but the boys enjoyed themselves tremendously. I am relieved they have not asked to go and see it again. Yet.
Posted by Melissa at 4:10 PM

So fun! I heard the movie was excellent, so I hope they enjoyed it. With Zoey's attention span I am afraid it will be another decade before she is allowed in a movie theater. :-)

How cute! When Christian was 2, he thought each preview was a movie. He was excited at all the movies he watched.

So cute...They look so little in their big seats. Such fun!