I am behind on everything these days so I apologize for just now uploading more of our Halloween photos. Oh, well, that's my life!

The kids were all so excited to see each other in their costumes. Ian was most excited when he saw the two tables covered in food. I was relieved that Ryan was able to attend the party because he kept an eye on Ian who was very determined to steal food before it was time to eat. 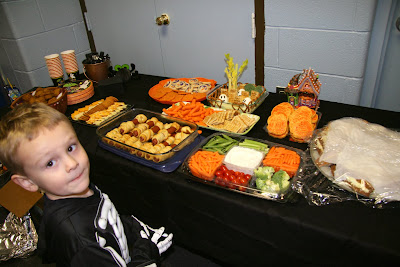 I saw this hummus graveyard in Family Fun magazine and just knew that it would be perfect for the party. We attempted a spooky food theme, but only a handful of us seemed up to the challenge. I just love that Wilton manufacturers the food safe pens which I used to write on crackers to create the headstones. 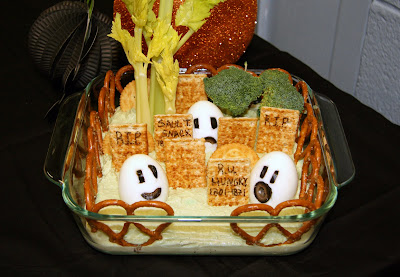 We requested that the kids allow us to take one group shot before eating. This worked well to convince my two boys to sit patiently for the picture. Ian never took his eyes off the food. Seriously. I promise that we do feed this boy 3 large meals plus snacks every day! 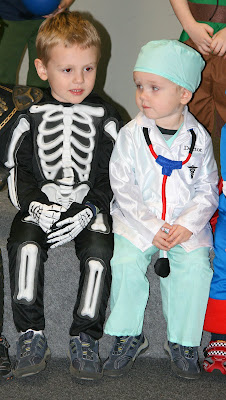 Before I even placed the lens cap on the camera, I swung around to see that Ian had taken a mummy dog for himself. Oh, my, goodness. 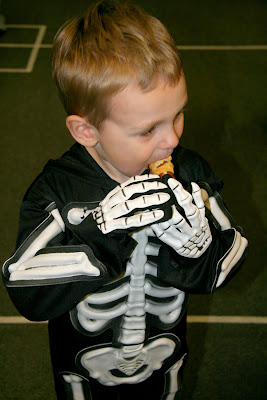 Nathan was a bit overwhelmed at the party and chose to sit safely at the table and nibble on food for 1 1/2 hours instead of joining in all the fun. He eventually played all the games and ran around, but he waited until half of the guests had left the party. Ian, on the other hand, was in good spirits (despite the too-small costume) and was more than happy to pose for a picture with dad. 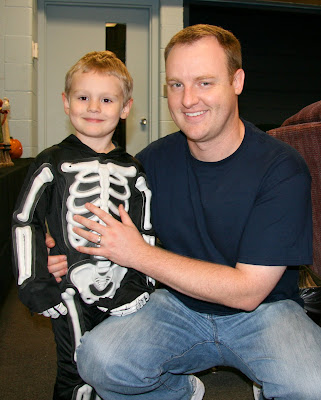 I love the graveyard. So clever!! The boys look so cute. I can just see Ian waiting and waiting and .......

Are you kidding me? I love the graveyard and can't believe you made it! I LOVE the picture of Nathan looking at the food. :-)